Cuban Sandwiches, Available for Takeout and Delivery Across the City

Cuban Sandwiches, Available for Takeout and Delivery Across the City 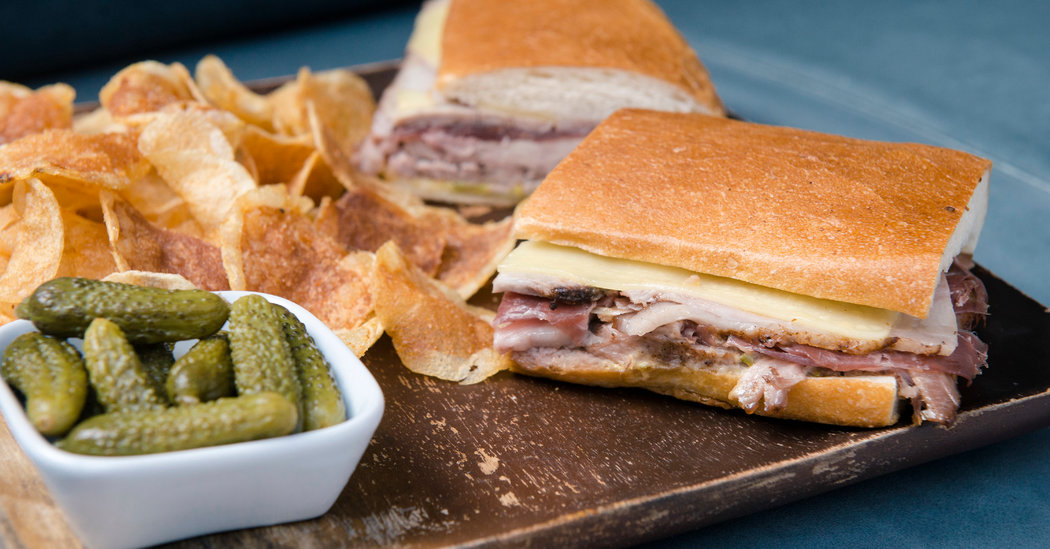 Maybe it was because I was in Havana, but the best Cuban sandwich I can remember having was in the garden overlooking the Malecón seafront at the historic Hotel Nacional de Cuba, an Art Deco beauty that would not be out of place in Rockefeller Center. That was in 2003, and I’ve had very good Cuban sandwiches before and since, in Miami and in New York. (The Cuban sandwich is said to have originated in Florida, among tobacco workers.) Yet as much as I enjoy the sandwich, I’ve never tackled layering and pressing a stack of pork loin, ham, Swiss cheese, pickles and mustard on a Cuban-style baguette. But even Covid-19 can’t change that, since there are plenty of options in New York for takeout and delivery.

A $16 Cuban sandwich comes with yucca fries or plantain chips.

A Cuban sandwich is not a far cry from an Italian pressed panino, as Pino Luongo is demonstrating at his Italian spot in SoHo. It wasn’t his idea. Customers who noted that the restaurant has a panini press started requesting it. It’s made with a split focaccia instead of bread, called Coco Cubano ($12), and is available Mondays, Wednesdays and Fridays. Bargain cocktails are also available for $8.

These uptown spots — one in Washington Heights, the other in Inwood — are known for sandwiches, not just the standard Cuban. A regular Cuban is $6 and the special with smoked ham is $7.50, both on a choice of Italian or egg bread.

The Cuban sandwich is $13 at the Midtown West location and in Forest Hills, Queens. Add a pitcher of mojitos, plain or in flavors like mango and coconut, for $50.

The menu at this Latin seaside restaurant includes a $15 Cubano.

Mark Fahrer, the caterer who owns MF Events, was supplying food for some health care facilities and manufacturers and has now pivoted to create an online market for delivery and pickup from his base in Brooklyn. The chef Corey Cash is working with him to prepare a menu of smoked barbecue items, cocktails and sandwiches to go. Among the sandwiches is La Cubana, made with smoked pork, barbecue-roasted ham, Swiss cheese, pickles and sauce on a pressed hero ($12). There’s also a vegetarian La Cubana with smoked jackfruit and smoked beets ($12). It can also be made vegan.

Here, the chef and owner, Louie Estrada, a Cuban-American from Miami, calls his classic sandwich “The Boss,” $11.

This restaurant — and not its sibling bakery, which is closed — is selling Cuban sandwiches, $16.