Snow and Cold in May: A ‘Nerve-Racking’ Time for Growers

Snow and Cold in May: A ‘Nerve-Racking’ Time for Growers 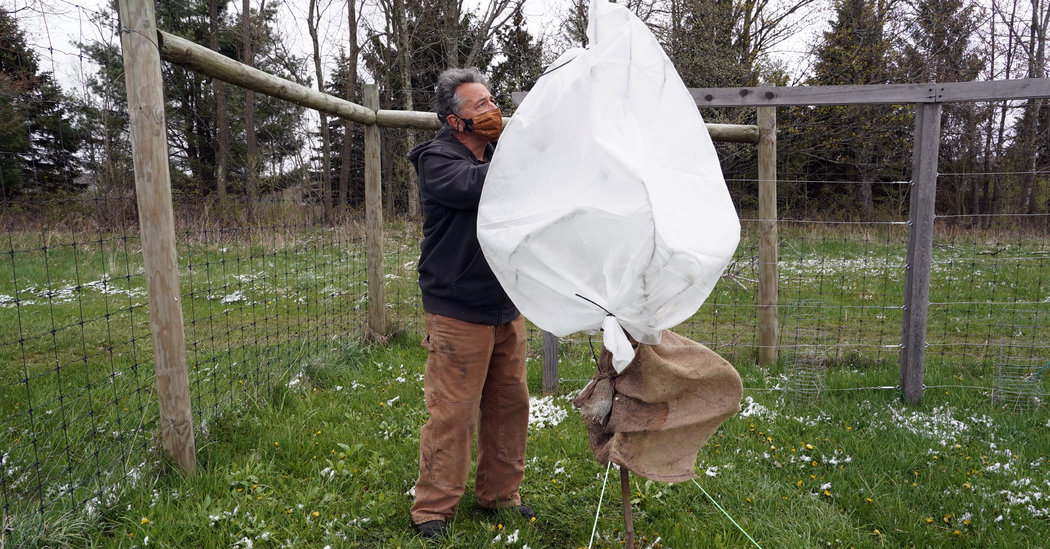 Workers at Westwind Orchard in Accord, N.Y., about 70 miles south of Albany, on Friday night sprayed water, molasses and kelp mineral on budding apple blossoms to help protect them against the cold.

By 5 a.m. on Saturday, growers were on the phone with each other to learn what kind of damage the unseasonable weather had unleashed.

“What we’re experiencing is nerve-racking and very unusual,” said Mike Biltonen, a pomologist who runs Know Your Roots, a small apple orchard and consulting company in Hector, N.Y., in the Finger Lakes region, about 20 miles west of Ithaca.

In New Hampshire, Massachusetts and Maine, people woke up on Saturday to find snow falling. The temperature in Worcester, Mass., fell to 30 degrees, breaking the previous record of 31 set on May 9, 1934, according to the National Weather Service.

At Bigelow Nurseries in Northborough, Mass., workers stayed hours after closing on Friday, pulling in annuals like begonias and petunias. They then covered the hydrangeas and Japanese maple trees, which had just started growing, with garden cloth to keep the blooms from dying.

“We had to scramble,” said Nick Steiman, a wholesale representative at the nursery. “Nothing got lost. It’s definitely going to slow down new growth but we didn’t have any fatalities.”

In parts of Massachusetts, forecasters warned of wind gusts of up 50 miles an hour through Saturday evening. The Weather Service warned of low temperatures through Sunday morning.

“Gusty winds could blow around unsecured objects,” the National Weather Service said. “Tree limbs could be blown down and a few power outages may result. Freeze conditions will kill crops and other sensitive vegetation.”

It was not the kind of forecast that farmers needed to hear as they continue to worry about how the coronavirus pandemic might affect their industry and the critical months in the summer and fall, when tourists come for the pick-your-own season or to drink cider on the sprawling acres.

Fabio Chizzola, the owner of Westwind Orchard, where tourists come for cider, pizza and Italian food, said he had managed to keep the business going during the pandemic by offering takeout.

He said he was lucky to not have had to lay off any workers, but the slog of isolating at home, then driving to the farm to work has become tiring.

John Wightman, owner of Wightman Fruit Farm in Kerhonkson, N.Y., says his apple trees are planted well above sea level and are closer to the warm air. Still, he said, he doesn’t know yet how the low temperatures will affect his apple trees.

“I still think I have a crop swinging,” he said. “It’s not doomsday. We’re cautiously optimistic that we’re going to persevere and have a crop, but it’s not in our hands.”

As unsettling as the weekend weather was, it was still better than April, when temperatures dipped to 23 degrees in parts of New York State, killing pear trees and damaging peaches, sweet cherries and apricots.

The temperature is expected to rise into the 50s on Sunday but fall again overnight before balmier weather returns on Tuesday.

Around the Finger Lakes, the temperature fell to 27 degrees overnight on Friday. It was cold but warm enough that farmers were able to protect their crops from destruction, Mr. Biltonen, the pomologist, said.

Search for pair of teens who vanished while tubing continues in Utah
Priscilla Bienkowski, 18, of Saratoga Springs and Sophia Hernandez, 17,…