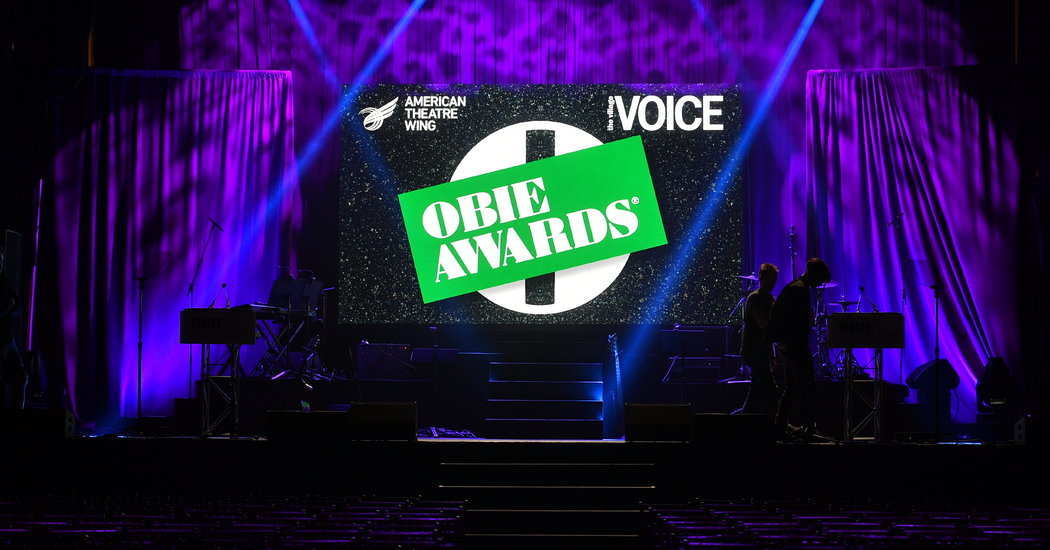 The Obie Awards, an annual ceremony honoring the best New York theater work performed Off and Off Off Broadway, will go virtual this year, forced online by the coronavirus pandemic that has caused the cancellation of in-person gatherings.

That’s not much of a surprise — almost all performing arts events this spring have been scuttled for public health reasons.

But here’s a twist: The awards’ organizers will give the money that would have been spent on an in-person event to artists whose plays could not be staged because of the outbreak.

“The judges felt very strongly that we needed to honor the great work that occurred, and to pay homage to what had not,” said Heather Hitchens, the president of the American Theater Wing, which presents the Obies with The Village Voice. “The virtual ceremony will celebrate what was, and offer relief grants to celebrate what might have been.”

The awards, given out annually since 1956, with informal categories determined each year by judges, will honor an abridged season: shows that opened between May 1, 2019 — the start of the season — and March 12, 2020 — the day that Gov. Andrew M. Cuomo banned large gatherings in an effort to slow the spread of the virus. The in-person ceremony had been scheduled to take place May 18; the date for the virtual ceremony has not been determined, but the hope is that it will be at around the same time, and will feature awards and performances.

The panel of judges is being led by the scenic designer Rachel Hauck, who won a Tony Award last year for “Hadestown,” and the choreographer Sam Pinkleton, a Tony nominee for “Natasha, Pierre & The Great Comet of 1812.”

The Wing estimates that more than 90 Off and Off Off Broadway shows were shuttered by the pandemic. Hitchens said that the Wing had cobbled together $250,000 — some intended to finance the in-person ceremony, and some raised from donors including the Edwin Barbey Charitable Trust and the production company No Guarantees — to give to people working on shows that were canceled or postponed. “The idea is $500 per artist until the funds run out,” she said.

The Wing, a theater advocacy organization founded in 1917 and best known as one of the sponsors of the Tony Awards, said it would also make small gifts to regional theaters and offer virtual master classes as part of its response to the pandemic.

The decision by the Obies is only the latest in a series of changes to theater awards ceremonies this year. The Olivier Awards, which honor theater in London’s West End, were scheduled to take place last Sunday but were replaced by a broadcast featuring highlights of previous ceremonies; the Oliviers hope to honor 2020 awards winners in the fall. The Tony Awards, which honor Broadway plays and musicals, have been indefinitely postponed, and it is not clear whether there will be an awards ceremony this year or a noncompetitive celebration of the industry.

Smaller awards ceremonies have chosen a variety of responses — the Lucille Lortel Awards, which also honor Off Broadway work, will hold a virtual ceremony, while the Chita Rivera Awards, which honor theatrical dance, were postponed from spring to later in the year. The Jimmy Awards, which honor high school musical theater performers, have been canceled.