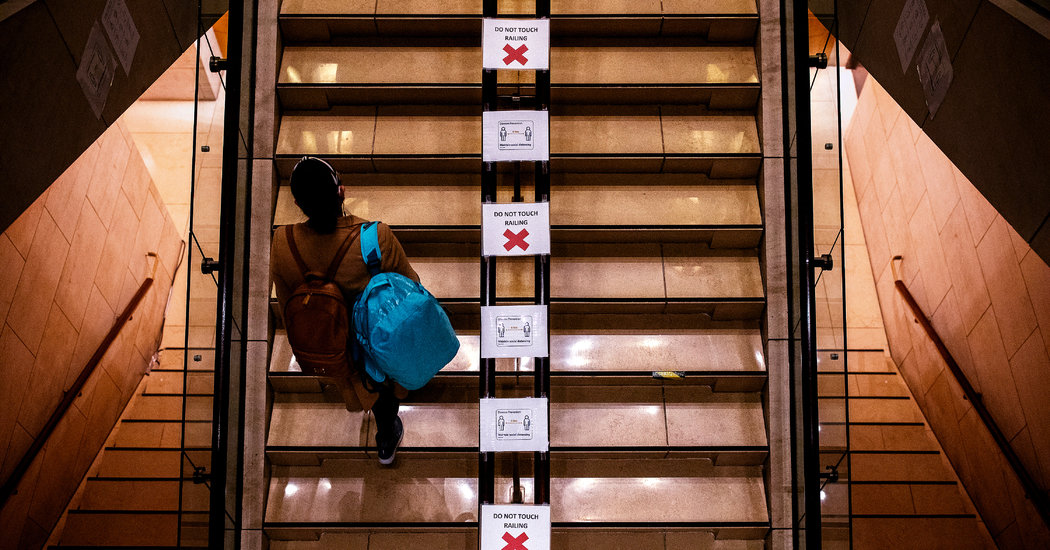 Just a few weeks ago, it was typical for personal assistants to make reservations for thousand-dollar rooms at the Four Seasons Hotel New York for their high-profile bosses.

But in late March, a worried mother calling on behalf of her physician assistant son to get a free room became the norm. The iconic Billionaires’ Row hotel had just announced that it would house medical professionals battling the Coronavirus.

“My mom, I think she must have been one of the first to reach out,” said the 31-year-old, whose hospital asked him to remain anonymous. He had been living on Long Island and commuting for two hours each way to his job in Manhattan. Now he’s a 20-minute walk to the hospital.

“I’ve never stayed in a hotel room this nice in my life,” he said. “In the middle of my shift, when things are getting chaotic and I’m eight hours in, it’s so nice to fall back on the idea that I have a place to go that is fairly close by and beautiful.” He’s scheduled to stay at the Four Seasons for 25 days.

Remnants of the hotel’s luxurious past — the Art Deco-inspired entrance, the onyx ceiling in the main lobby, the oversize soaking tubs in the suites — are extravagant extras now that the five-star property has been converted into something akin to a military barracks.

“This is not a hotel anymore,” said Dr. Robert Quigley, the senior vice president and medical director for International SOS, a medical and travel security services firm, which is overseeing the hotel’s new protocols. “It’s housing for a high-risk subpopulation.”

The Four Seasons, just like nearby Central Park and the USTA Billie Jean King National Tennis Center in Flushing, Queens, is yet another New York City landmark being retrofitted to fight the pandemic.

Although other hotels in the city are helping with hospital bed overflow, the Four Seasons has dedicated itself exclusively to keeping doctors, nurses and other medical professionals well rested and safe.

At the entrance, two nurses, wearing N95 masks, take the temperatures of all guests, asking questions about symptoms over the past 72 hours and if they’ve washed their hands. Once inside, guests go straight to their rooms; there is no bar or restaurant. Elevators carry one passenger at a time; others must wait on taped Xs on the floor, placed six feet apart.

Of the hotel’s 368 rooms, only 225 will have guests to limit crowding on the property.

Guests and hotel staff no longer interact. For check-in, keys are placed in envelopes on a table. Minibars have been taken out of guest rooms. Housekeeping is an amenity of the past; rooms are provided with extra linens and towels.

Dirty items are collected only after guests, who stay for a minimum of seven days, check out and the room has been fumigated. Beds no longer have decorative pillows, which can spread germs. On every nightstand is not a piece of chocolate from turndown service but a bottle of hand sanitizer.

It has been an adjustment. “One of the hotel’s managers was so upset, because he said, ‘Where are we going to give them coffee?” said Dr. Quigley, now known by Four Seasons staff as Dr. Q. “I said: ‘You’re not. We are going to have to change that behavior.’”

(Coffee makers are placed in every room upon request. The hotel also offers boxed lunches.)

The idea to repurpose the Four Seasons came from the hotel’s owner, Ty Warner. He knew it was going to be difficult. He likened it to opening a new hotel. “My mouth went dry when I got the call,” said Rudy Tauscher, the hotel’s general manager.

Mr. Tauscher knew it was wishful thinking, he said, but he was already fantasizing about giving exhausted medical workers “the most delicious breakfast before their hard day of work, from egg-white omelets to smoked salmon bagels, to fresh fruits and fresh juices.”

That did not happen. Instead, Mr. Tauscher stepped aside as a new team, spearheaded by Dr. Quigley, planned the emergency residence in a matter of days. Between March 29 and April 2, the day the hotel reopened (it had closed down for the quarantine on March 20), the team reinvented every process, from where staff members would rest during breaks (about a quarter of them are still working), to how guests would replace lost keys.

If guests didn’t pass the health screening at the door, they would be escorted to a “red zone,” before being transported to a care facility. A mental health plan was also introduced.

“My team and I have started daily call-arounds,” said Elizabeth Ortiz, the hotel’s director in charge of personnel. “We literally call every single employee to ensure they are getting to work OK, they are feeling OK. A big part of it is also showing gratitude.”

But all of that prep time didn’t begin, unfortunately, until days after Gov. Andrew M. Cuomo and Mr. Warner announced that the Four Seasons would reopen for medical professionals. The hotel was unprepared for what happened next: Thousands of doctors and nurses swarmed the phone lines. “It totally overwhelmed the ordinary systems in place,” said Greg Scandaglia, Mr. Warner’s lawyer.

Some of the earliest callers, like the physician assistant’s mother, were able to book a room.

Dr. Dara Kass, an emergency room doctor, moved into the West 57th Street hotel from her home in Park Slope, Brooklyn, because one of her children is immunocompromised. She was shocked by what she found. “As you enter the hotel, it’s the same procedures as when you enter the hospital,” she said. “That is remarkable.”

The hotel’s attempts to mitigate risk of infection are, for her, the ultimate luxury. “You can come back from a shift in the E.R. and still feel safe,” she said. “For me, that is what is above and beyond.”

But Dr. Kass was one of the lucky ones. It didn’t work out for Alina Weissman, a 42-year-old nurse, or many of her colleagues. She said she called the hotel several days in a row. Her name and number were taken down repeatedly, she said, but she was never contacted about a room. She eventually moved into a friend’s corporate apartment.

“If you’re going to offer, please follow through or at least have a plan in place,” Ms. Weissman said. “They kept giving me false hope. I’m livid about it.”

The hotel is now working directly with New York hospitals and medical associations, including the New York State Nurses Association, which are handling reservation requests internally. “If you are a nurse and you want to stay with us, you tell the people you report to that you are interested,” Mr. Scandaglia said.

Other New York City hotels are hosting medical professionals, too, but not necessarily for free. The Redbury New York has rooms starting at $100 a night, and the Hotel Hayden is offering nightly rates of $69, drink credits included (it has yet to get rid of its minibars).

Though neither of the hotels have gone as far as the Four Seasons, both have implemented extra cleaning procedures — the Redbury has added seven people to wipe down and sanitize public areas.

Mr. Quigley suggested that other vacant properties could follow the Four Seasons model soon. “I’ve gotten multiple calls from multiple hotels around this country and the world to replicate what we did,” he said. “Now we have a benchmark.”