She Cleans for Affluent Manhattanites. Will She Get Coronavirus?

She Cleans for Affluent Manhattanites. Will She Get Coronavirus? 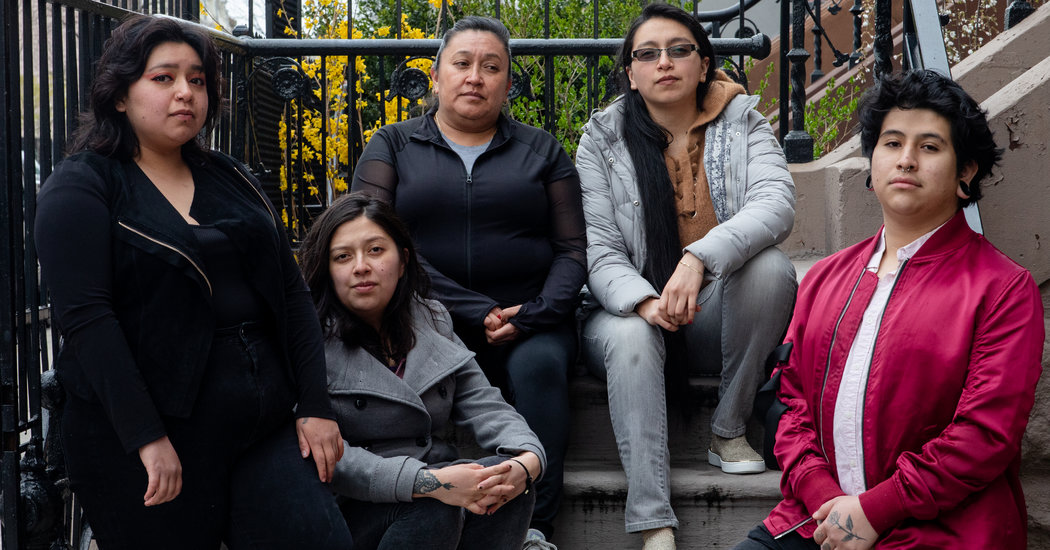 When the coronavirus struck New York City and most businesses were ordered to close, Luz’s employers on the Upper East Side of Manhattan allowed her to take a break. Two days later, they messaged her: Come back.

“She asked me if I was OK, if I was sick,” Luz said of her employer, a family of four with two school-aged children. The mother then told her: “If everyone in your home is OK, I need you to come help with the kids and the house.”

Luz, an undocumented immigrant from Mexico who lives in the Bronx, is a housekeeper and nanny, and she has become her family’s sole breadwinner since her husband lost his restaurant job and the city’s economy collapsed.

Her dilemma — whether to work and risk exposure to the virus, or to stay home and fall into a deeper financial hole — is one shared by many low-income New Yorkers as the city has become the epicenter of the pandemic in America.

For thousands of domestic workers who clean and cook for the well off, the crisis has laid bare the city’s stratification. Struggling financially even in the best of times, they do not have the luxury of prioritizing their health now.

Some have already lost their jobs, with their employers departing to second homes at the beach or upstate. Those who are working climb onto subways and buses to go clean and sustain the homes of people who can afford to self-quarantine.

“You run a risk each time you step out of your home,” said Luz, 36, who like several people interviewed for this article asked to be identified only by her first name because of her immigration status.

Like Luz, many domestic workers are undocumented and do not qualify for most forms of government assistance.

New York State health officials announced recently that undocumented immigrants would be able to access emergency Medicaid benefits to cover the cost of testing and treatment if they contracted the coronavirus.

And federal officials have said that seeking medical care will not activate the so-called public charge rule, which penalizes green card applicants if they have used public benefits.

Yet advocates for immigrants say that is not enough. They have criticized the exclusion of undocumented immigrants from the federal government’s $2 trillion dollar stimulus package. Even couples where one spouse is documented and the other is not are ineligible.

They argue that, regardless of their legal status, immigrants make up a large portion of the work force doing jobs that will keep the country afloat: farm work, stocking grocery stores, delivering food, taking care of older people and the disabled and cleaning homes and buildings.

“Immigrants continue to be on the front lines of this response,” said Steven Choi, executive director of the New York Immigration Coalition in New York.

Since the coronavirus crisis erupted, Luz’s workload has actually grown. She now has to cook for the family, which is quarantined because the virus was detected at one child’s school, she said, and entertain the children, 8 and 12, who get restless when their schoolwork is done and they can’t go outside.

Luz takes them into the hallway outside the apartment to play catch so their parents can quietly work from home. “This is hard for them, too,” she said of her employers.

She also has to clean even more — wiping down surfaces, washing hands, taking care not to let the towels she uses to dry her hands get mixed in with the family’s laundry. Her 10-hour workdays are exhausting. Her weekly salary of $700 has not changed.

There are nearly half a million undocumented immigrants in New York City, according to a recent report by the Mayor’s Office of Immigrant Affairs. More than three-quarters were in the labor force last year, the report found, but they had the lowest median annual earnings of any group of working New Yorkers: just over $26,000.

To receive one of the $1,200 cash payments included in the federal aid package, plus $500 per child, workers need to have filed federal income taxes using a Social Security number.

Undocumented workers do not qualify for Social Security numbers and instead use individual taxpayer identification numbers to file.

But many point out that they still file tax returns. One cleaner in Manhattan, Celsio, who is from Ecuador, said, “I came here to work, but also to pay taxes.”

Celsio, 45, says he now cleans the homes of 10 customers a week, down from 50, and is nervous about making next month’s rent. He is not even sure he will be able to buy the basics of his trade: Cleaning products such as Lysol have vanished from many stores and are sometimes being sold at exorbitant prices.

Domestic workers say they need to keep working not only for their own financial needs, but for the many older, sick and disabled New Yorkers who rely on them.

Bessie Dozis, 75, has a helper from Mexico named Rosa, who comes to her home in Astoria, Queens, seven days a week to bathe and dress her 75-year-old husband, Peter Dozis, who has Parkinson’s disease, and take him to medical appointments. “I asked if she needed to stay home — it was up to her,” Ms. Dozis said.

Rosa, 52, kept working. “When I arrive, he’s happy, because he knows I am going to help him get up out of his recliner,” she said. After tending to Mr. Dozis, she shares meals with the couple.

When she leaves home for work, her children tell her “Cuídate, Mami”: Be careful, Mom.

Being undocumented has added an extra layer of anxiety for workers already nervous about getting sick.

U.S. Immigration and Customs Enforcement has stressed its policy of not detaining immigrants in or around hospitals and suggested in mid-March that it would stop most arrests to avoid the possibility of introducing the coronavirus into detention centers. (The head of the Department of Homeland Security, which oversees ICE, later attempted to walk back that statement.)

Yet many undocumented immigrants remain skeptical, and rumors abound. Tests for coronavirus cost $3,000, some mistakenly believe.

Obstacles to testing — including not having a car to reach drive-through testing sites — have left many feeling on their own.

But some do feel supported. In many cases, domestic workers’ regular employers — even if they canceled cleaning services — have offered to keep paying them and to help in case of an emergency.

Leticia Aparicio, 34, a cleaner from Mexico, said her clients had canceled in recent weeks but had continued paying her. “I don’t know, I feel bad — I’m not used to that,” said Ms. Aparicio, breaking down in tears.

Still, she can now afford to stay home with her two young daughters, who are home from school, while her husband goes to his construction job.

Another housekeeper, Yoseline Rosas, was the only person in her seven-person household in the Bronx who was still employed last week. Then, she, too, was dismissed from her job — cleaning and babysitting for a divorced lawyer on the Upper East Side — but the lawyer said she would continue paying her usual salary of $600 a week until the crisis had passed.

For some, the consequences of continuing to work have already proved clear.

Veronica Sampedro, 46, a legal resident originally from Mexico who runs a cleaning business in Manhattan with her three daughters, was still managing to clean some homes until a few days ago, when she and one of her daughters began having flulike symptoms, including fever and fatigue.

Now another daughter has lost her sense of taste and smell.

But so far, they have not gotten tested, hoping that their sickness will pass.

Yellow fever: Deploy yellow cabs and their plastic shields to protect drivers during the coronavirus emergency
Once, all yellows had shields, but in 2016 the anti-crime…