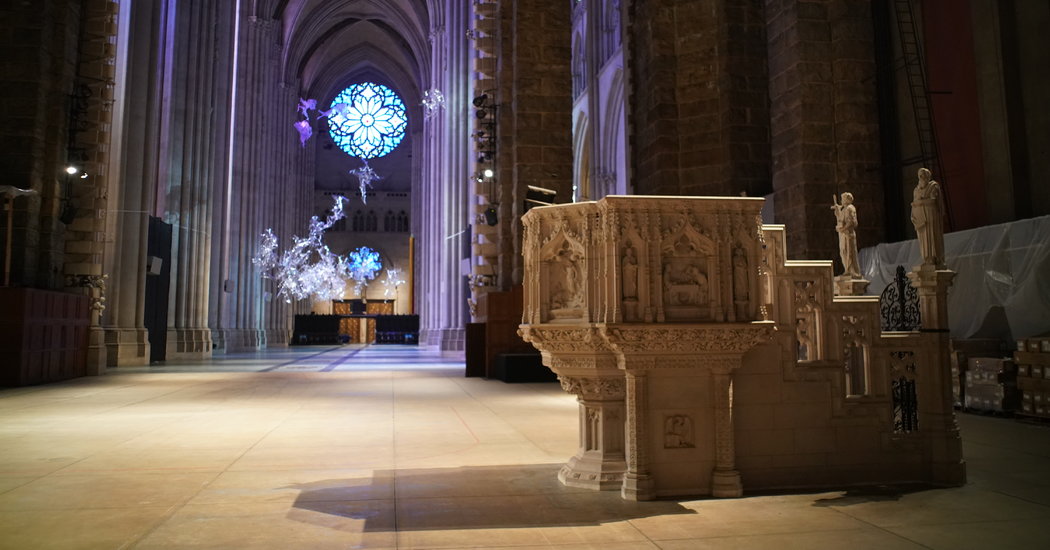 The vast interior of the Cathedral Church of St. John the Divine in Manhattan stood empty on Monday, the thousands of chairs that normally sit beneath its soaring ceiling and stained-glass windows removed to make room for a more grim sight: a coronavirus field hospital.

The cathedral, which describes itself as the largest Gothic cathedral in the world, said on Monday that its 600-foot-long nave and equally large subterranean crypt would be turned into an emergency hospital as part of the fight against the pandemic.

Nine climate-controlled medical tents capable of holding a total of at least 200 patients will be erected inside the cathedral by the end of the week, said the Rt. Rev. Clifton Daniel III, the dean of the cathedral.

The crypt, which is primarily accessible via a series of winding staircases, will be used as “a staging area” for medical personnel, he said. It is the first time the cathedral, which is the seat of the Episcopal Diocese of New York, will have been used for such a task, he said.

“The last thing like this was the flu pandemic in 1918, but the world was different then and I don’t think they used the cathedral in this way,” Dean Daniel said in an interview inside the empty church. “But traditionally, in earlier centuries, cathedrals were always used this way, like during the plague. So this is not outside the experience of being a cathedral, it is just new to us.”

Patients are expected to arrive at the cathedral field hospital by the end of this week or early next week, said James Patterson, its director of facilities and capital projects. He said roughly 400 beds were delivered to the cathedral last week and three tents sat in crates on a loading dock on Monday.

Church officials said that it was not clear if patients with Covid-19, the disease caused by the coronavirus, would be sent to the cathedral, but that it seemed likely given the scale of the outbreak.

“We are assuming that there will be,” Mr. Patterson said. “That’s the way people were talking today.”

The field hospital will be staffed with personnel from Mount Sinai Morningside Hospital, which sits next door to the cathedral complex, a manicured 11-acre oasis in Morningside Heights that houses several stone buildings and three peacocks.

Dean Daniel said he offered the use of the cathedral to the hospital last month.

Once the field hospital is up and running, Mr. Patterson said, the cathedral’s primary job will be prosaic but essential things like providing heat and “keeping the lights on.”

He said that organizing the field hospital had been a logistical challenge and that it remained unclear how the hospital would perform some tasks, in particular when it comes to questions of feeding and bathing patients.

“There is still a lot of engineering involved with things like showers and things like that, that we all take for granted,” Mr. Patterson said. “That is something they need to figure out.”

Samaritan’s Purse, a nondenominational evangelical Christian humanitarian organization that built a field hospital in Central Park last month, has also been involved in the hospital in the cathedral, Dean Daniel said.

The group is led by the Rev. Franklin Graham, who has been criticized for anti-Muslim and anti-L.G.B.T.Q. rhetoric that stands in contrast to the more inclusive vision of Christianity embraced by the cathedral.

Mayor Bill de Blasio said at a news conference last week that the city and Mount Sinai had received assurances from Samaritan’s Purse that it would follow the city’s anti-discrimination laws in providing treatment.

Dean Daniel said the participation of Samaritan’s Purse in the field hospital should not be interpreted as an endorsement of its views.

“I don’t agree with their position on Muslims and gays and a number of other things, but I am willing to work together with them to save lives,” he said. “I feel like it is sort of like the steward on the Titanic as it is sinking — now is not the time to count the silverware, you have to get people into lifeboats.”

Why New York will get through this: We will survive the coronavirus pandemic because of our people
We are in what the singer Vic Chestnutt called “the…