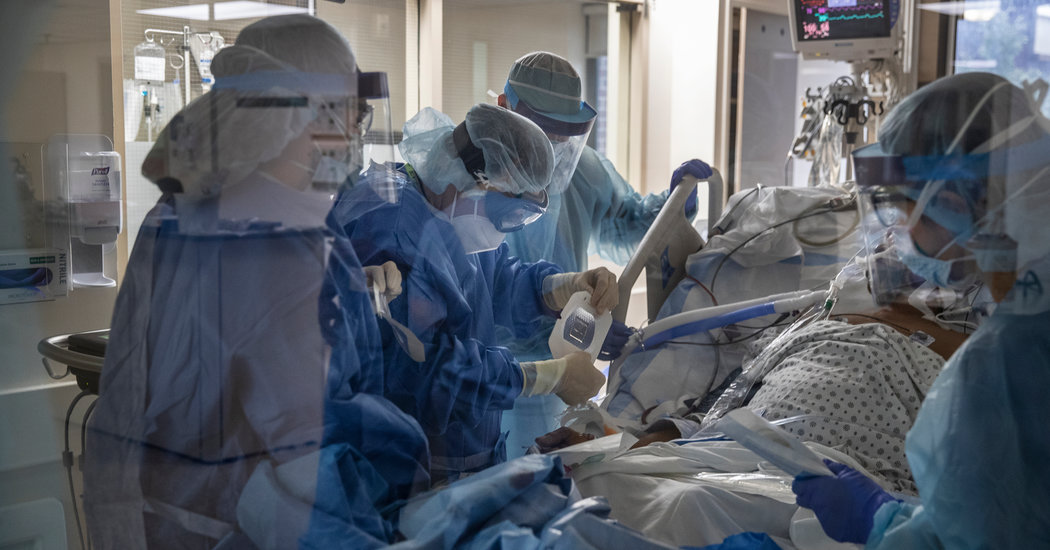 A lot of times, doctors and nurses almost feel invulnerable, but it’s hard for them to see their colleagues being admitted to the hospital and not have that sense of invulnerability shattered. I’m Sheri Fink. I’m a correspondent at the New York Times. Many years ago, I went to medical school. Victor Blue, a photographer, and I spent some time at Brooklyn Hospital. “So what is he on, drug-wise?” This hospital, just within the last week, had almost doubled the capacity to treat patients in the intensive care unit. “The opportunity for beds here are pretty significant.” The staff members from all over the hospital were helping out, so there were nurses from the cardiac catheterization lab. There were podiatry physicians. There was a neurosurgery physician assistant helping out. I think what really stood out to me was the toll on the medical providers and the fact that so many of the staff members are sick. One of the hospital’s employees was admitted to the intensive care unit while I was there. “And we do that for our nurses, one, because they actually go through the most PPE, because they have so many tasks they have to do.” Dr. Josh Rosenberg— he’s an intensive care unit doctor. I feel like he was bouncing on his toes the whole time. “Easier and I waste less PPE. And that way I’m in all the rooms and done.” And then I found out that he himself had been out and this was his first day back. It just highlights how brave the people are for showing up every day and doing their work. “The blood gas looks pretty darn skippy.” In one case, a patient, their cardiac status, the ability of the heart to pump blood everywhere that it’s needed, was starting to have some problems. So in this case, they were starting what’s called a central line. And that way, they could administer certain drugs that could help the heart. And of course, anytime that you’re close to a patient and performing a procedure, it can be a risk for the health care providers. But it’s not all doom and gloom. The doctors, the nurses, the staff members— they’re trying not to let it get them down, trying to focus on the task at hand. Obviously, this is super difficult. And when they go home at night, a lot of them describe just grappling with everything that they’re seeing and experiencing. But in the moment, they’re keeping each other’s spirits up. They’re going about the work. “Yeah, I’ll take care of that one.” When I would ask the health professionals who I was speaking with at the hospital whether they had anything else to say, whether they had a message for the larger public, their message has been, stay home, protect yourself, reduce your risk, follow the recommendations, so that you minimize the chance that you will get sick. And that helps them be able to take care of people who really need that help.