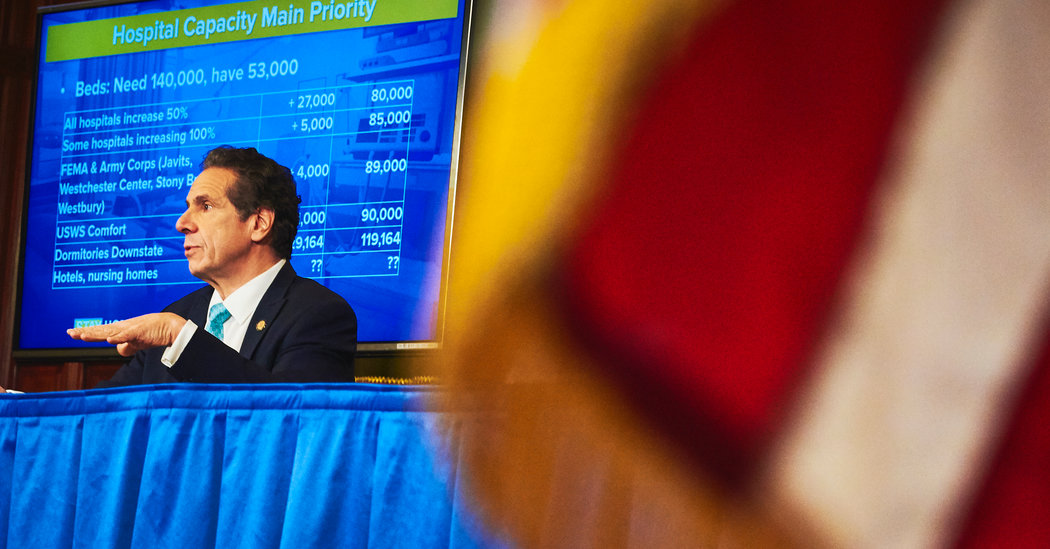 ALBANY, N.Y. — For Gov. Andrew M. Cuomo, it should have been a softball question lobbed from a friendly source.

The governor’s brother, Chris Cuomo, the CNN anchor, asked what he thought of President Trump’s repeated insinuation that health care workers in New York City were stealing medical supplies from hospitals by taking them “out the back door.”

But Governor Cuomo did not take the bait.

“It’s a very vague thing,” the governor said. “It went out the back door? I don’t know what that means.”

“It didn’t go out the back door,” Chris Cuomo said. “He is saying somebody is taking it.”

“Maybe that’s what he means but I don’t know,” the governor replied. “It’s a very vague reference.”

The exchange on Monday was a vivid example of the delicate balance that Mr. Cuomo, a third-term Democrat who is enjoying a surge in popularity, has struck in his handling of the Republican president.

It is a daily dance that employs equal parts open flattery and indirect attack, bended knee and sleight of hand. In practical terms, that plays out in the governor’s complimenting the president by name, but seldom attacking him that way.

While most Democratic leaders criticize Mr. Trump at nearly every turn, Mr. Cuomo has made it clear that he is more interested in getting New York help to fight the outbreak than he is in engaging the president in a war of words.

And Mr. Trump has returned the gesture.

On Thursday, the White House released a letter that President Trump sent to Senator Chuck Schumer of New York, the Democratic leader, accusing him of failing to better prepare New York for the virus because he was “missing in action.”

The president then suggested that Mr. Schumer begin working with Mr. Cuomo “for the good of all New Yorkers.”

The letter followed up an earlier blast on Twitter, where the president urged Mr. Schumer to “stop complaining & find out where all of these supplies are going.”

Mr. Trump closed the last of his two posts with another shout out to New York’s governor: “Cuomo working hard!”

Like the president, Mr. Cuomo has been ready to criticize Senator Schumer, a fellow Democrat, suggesting that the senior senator of New York had failed his constituents in the $2 trillion stimulus package.

“It would be nice if he passed a piece of legislation that actually helped the State of New York,” Mr. Cuomo said on Sunday.

The governor’s soft touch with the president would seem to be a departure from his style in Albany, where he has been in office for nearly a decade, and is known as the consummate political animal who thrives on conflict.

But Mr. Cuomo is also a proudly pragmatic deal-maker who has readily and regularly worked with Republicans when that party controlled the State Senate, infuriating some fellow Democrats, especially progressives. And in dealing with the president, the governor has seemed to refine that strategy, recognizing that Mr. Trump’s political antennae are fine-tuned to detect both praise and put-downs.

“The trick to Trump is not to embarrass him in public,” said Hank Sheinkopf, a veteran Democratic political consultant who has known both men for decades. “Being a Trump whisperer means he can criticize him obliquely, by talking about the national government’s failure to respond.

“But he can’t attack him personally,” Mr. Sheinkopf continued, “because then he loses any opportunity to talk to him behind the scenes to get anything done.”

Mr. Cuomo’s tactics have seemingly paid off in tangible ways. In the month since the virus was first discovered in New York, the governor has finagled or finessed the creation of thousands of federally financed hospital beds; the federal authorization of labs in the state to run coronavirus tests; and the arrival on Monday of a federal hospital ship, U.S.N.S. Comfort, which the state hopes will help relieve pressure on local hospitals, though it has been largely underused thus far.

Some of that largess has been born of sheer necessity: New York remains the national epicenter of the outbreak, with more than 92,000 confirmed cases and more than 2,300 deaths.

By the same token, Mr. Trump has been complimentary of Mr. Cuomo’s performance on several occasions, perhaps aware of the governor’s good reviews for his handling of the outbreak.

“With Cuomo he’s not dealing with a governor: He’s dealing with a person who could shape the public opinion nationally, and affect the outcome of the presidential election,” said Gerald Benjamin, distinguished professor of politics at SUNY New Paltz. “Cuomo requires distinct tactics from Trump’s point of view.”

Mr. Trump and Mr. Cuomo have known each other for decades and share similar histories and traits: Both are Queens natives, sons of powerful fathers, with a need to prove themselves. Both are known as brash and demanding bosses, and both like the spotlight.

Mr. Cuomo, who served as secretary of housing and urban development under President Bill Clinton, also understands that New York is in an inherently dependent position in relationship to Washington, said George Arzt, a political consultant who was press secretary to Mayor Edward I. Koch.

There have been skirmishes between the two men: Trump has accused Mr. Cuomo of overstating the number of ventilators the state needs, and suggested on several occasions that the governor is a malcontent.

Still, those brush-backs are mild compared to the type of vitriol that Mr. Trump has leveled at other Democratic governors like Michigan’s Gretchen Whitmer, who the president said was in “way over her head” and didn’t “have a clue” how to confront the crisis.

Mr. Murphy said that even with a “New York echo chamber that all hates Trump,” Mr. Cuomo was “not looking for enemies right now,” given the state’s urgent needs.

“Cuomo just knows that total war would be good for him politically in some dimension, but operationally, it would be a huge pain,” he said.

Mr. Cuomo’s position also stands in opposition to that of Mayor Bill de Blasio, who has repeatedly criticized the president, although his tone has become more measured in recent days.

Mr. Trump has not taken such comments well.

For his part, Mr. Cuomo says that he is not being obsequious and is willing to fight the administration. “I’m a tangler,” he said.

But he insisted that the crisis is too big for squabbling.