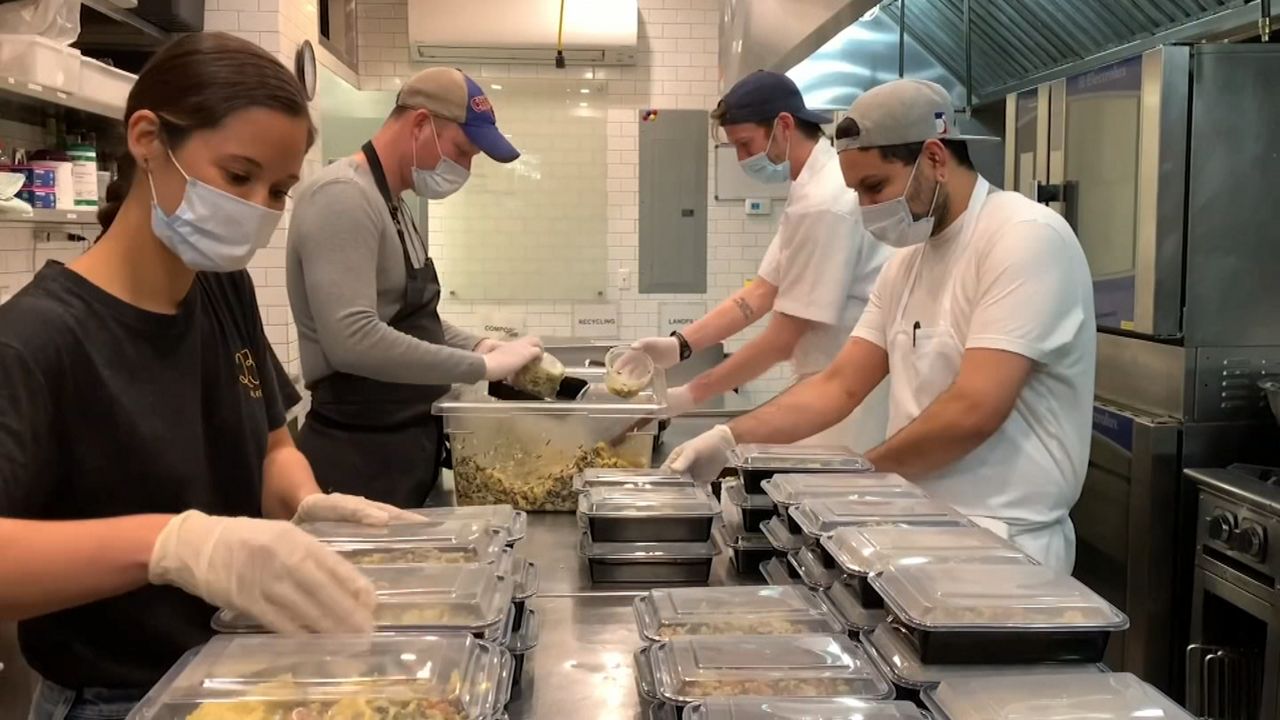 BROOKLYN, N.Y. – At the Olmsted restaurant in Prospect Heights chefs are still in the kitchen.

But they’re not cooking for take out or delivery – they’re preparing meals for hundreds of food service employees thrown out of work by the pandemic.

“Every restaurant they make what is called family meal. And so you’re making simpler food, delicious comfort food for all of the employees. And we have 60 employees, so we were already doing that for 60 people. So it’s not that crazy for us to add another 150 to that,” said Olmsted chef-owner Greg Braxtrom.

When restaurants were ordered to end on-site dining, Olmsted’s owners decided to close rather than offer take out and delivery.

They were able to raise about $75,000 on a GoFundMe page to help their workers. But they wanted to do more.

The restaurant partnered with a not-for-profit, the Lee Initiative, which helps restaurant workers who suddenly find themselves unemployed.

They got some funding and some sponsorship and opened a food bank.

“We wanna give as much resource to the community as possible,” said Olmsted owner Max Katzenberg.

The food bank is open daily from 4 p.m. to 7 p.m. It was originally meant for food service workers but it soon expanded to anyone who needs a meal.

Food is donated by neighboring restaurants or comes from Olmsted’s on-site garden.

The volunteer chefs prepare more than 250 meals a day.

The Olmstead also offers essentials like diapers and toiletries.

And that’s not all Olmsted is doing to help businesses like them. The owners also formed a not-for-profit called the New York Hospitality Coalition.

“Our businesses are in jeopardy. the restaurant industry, the types of businesses that we have, they are not set up to sustain any period of time without revenue. And without substantial disaster relief from the federal state and local governments its safe to say that thousands of businesses will not reopen after this closure,” Braxtrom said.

The coalition works to quickly provide information to service industry workers and owners throughout the city.

Though still in its infancy, the group has more than 500 member partners and is directing anyone in the hospitality industry to its Instagram page for updates.

Who Lives And Who Dies If Hospitals Run Out Of Ventilators? And Who Decides? NY State Report Offers Clues
With an ever-increasing number of critically ill COVID-19 patients, Governor…