Should Doctors Have the Right to Withhold Care From the Sickest Coronavirus Patients?

Should Doctors Have the Right to Withhold Care From the Sickest Coronavirus Patients? 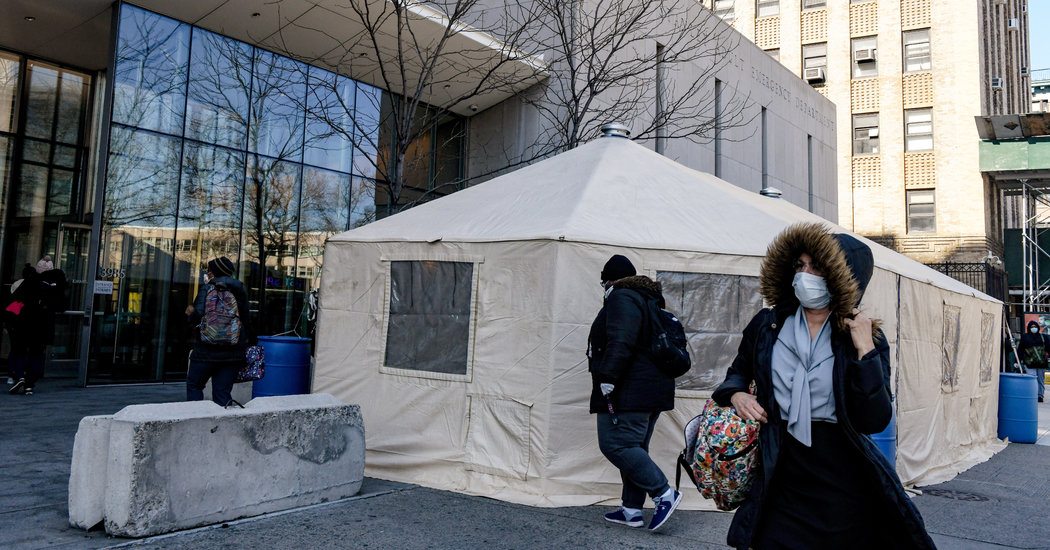 One patient had lymphoma and heart failure. Another was 85 years old with metastatic cancer. A third was 83 and had dementia and lung disease. All were critically ill with the coronavirus, and, a doctor said, all were hooked up to ventilators in recent weeks at a major Manhattan hospital.

But soon, patients such as those might not receive similar aggressive treatment. As people with the virus overwhelm New York City hospitals, doctors have stepped up pressure on state health officials to give them a rare and unsettling power: the right to withhold care from patients who are not likely to recover.

Dwindling supplies mean there might not be enough ventilators or other items for everyone, and many doctors say they are growing increasingly uneasy with treating every patient equally. They believe medical workers soon might need to make difficult choices about treatment.

“Usually, the standard is to intubate and do CPR and do all those things,” said Dr. Angela Mills, the chief of emergency medicine services at NewYork-Presbyterian/Columbia University Medical Center. “There’s no question about it; that will not most likely be sustainable.”

New York is the epicenter of the coronavirus in the United States, but doctors have wrestled with questions over whether, and how, to ration care from the beginning of the global outbreak. In China, many patients with Covid-19 were initially turned away from hospitals, and in Italy, hospitals have given younger, healthier patients priority for ventilators over older, sicker adults.

The problem is a grim and wrenching one, and the experience of doctors in New York could signal what is to come for their colleagues in other states, which have begun dusting off triage plans.

The New York chapter of the American College of Physicians, a national organization of internists, wrote to Gov. Andrew M. Cuomo last week, asking that he issue an executive order granting doctors immunity from liability for the decisions they make “when the need for allocation of ventilators results in some patients being denied access.”

Mr. Cuomo has repeatedly said he does not want to allow hospitals to ration care. No hospital has yet run out of ventilators, he has said. Some hospitals are experimenting with putting multiple people on one machine.

“There’s no protocol,” Mr. Cuomo said on Tuesday when asked if there would be a triage for patients if critical supplies run out.

Still, state health officials have had discussions with hospital representatives about how to quickly implement new rules, if they are needed, according to people familiar with the matter. Two weeks ago, a draft was circulated, although nothing has been implemented.

A spokeswoman for the state Department of Health declined to answer questions about the discussions and instead referred to Mr. Cuomo’s stance that triage should not be necessary. She also pointed to a recent executive order by Mr. Cuomo that would protect doctors from lawsuits in Covid-related cases, but an American College of Physicians representative said on Wednesday that the order did not go far enough.

In the face of inaction from Albany, hospitals and physicians in New York have been talking among themselves in recent days to formalize common guidelines.

“The goal is to have some kind of overarching concept of how to deal with a pandemic that we’ve never dealt with before — how to deal with the level of illness we’ve never seen before,” said Dr. Stuart Kessler, the emergency department director at Elmhurst Hospital Center, a particularly hard-hit public hospital in Queens.

The New York Times spoke to six doctors at five major city hospitals who said they worried they soon would have to decide on their own not to take the most aggressive lifesaving measures in every case. In addition to the moral anguish that may cause, some feared they would run the risk of lawsuits or even criminal charges if they went against the wishes of a patient or family.

Steven A. McDonald, an emergency room doctor at NewYork-Presbyterian, said he wrote to his supervisors on Tuesday asking for guidelines for making decisions about who should receive a ventilator and who should not.

“The feedback I got from my department is that the hospital wants to wait for the governor to come down with their own guidelines,” he said.

Hospitalizations and admissions to intensive care units are growing in New York, although at a slower pace than they were two weeks ago. Mr. Cuomo has said they are expected to peak in the next two weeks to a month, unnerving doctors.

“We are on the battlefield. We are in the trenches and in the middle of a war,” said Dr. Robert L. Klitzman, the director of the masters of bioethics programs at Columbia University. “And we have not trained our medical staff to deal with military battlefield medicine and ethics.”

At individual hospitals, there have been moments when a surge of patients has overwhelmed resources and staff.

“We teeter on the brink of needing to ration ventilators, and then we back off for a little bit,” said Dr. Tia Powell, the director of the Montefiore Einstein Center for Bioethics, part of Montefiore Medical Center in the Bronx.

Other equipment, such as intravenous pumps needed for delivering medicine to patients on ventilators, has also been in short supply in some places.

Dr. McDonald said that when he arrived to work at NewYork-Presbyterian/Allen hospital in Upper Manhattan on Monday, the hospital was redirecting ambulances to other hospitals. When he asked why, he said he was told the facility had run out of ventilators — until a patient’s death freed one up. He said he wondered what would happen if other hospitals were also at capacity.

“At some point, we’re just going to have to take these patients and process them accordingly,” he said. A spokeswoman for the hospital declined to comment.

A Connecticut man, John Schalhoub, said doctors seemed to be making decisions about rationing care when his mother- and father-in-law both were admitted to Elmhurst Hospital Center. Mr. Schalhoub said he learned through an insurance company that his mother-in-law had tested positive for the coronavirus, but he did not receive his father-in-law’s results.

His in-laws, Rong-Hua Xie and Mei-Chun Huang, both 88, were given supplemental oxygen through face masks. But Mr. Schalhoub said doctors explained neither would be given a ventilator if they ultimately needed one.

“They’re basically saying that the use of ventilators is a last resort, but they have not had success with them with people of advanced age,” Mr. Schalhoub said.

Dr. Mitchell Katz, the head of New York City’s public hospital system, said none of the facilities he oversees had yet had to prioritize who gets a ventilator. “To my knowledge, no ethical system would ever use age as a sole criteria,” Dr. Katz wrote in an email.

Ms. Huang died on Tuesday. She was not given a ventilator or other lifesaving measures, Mr. Schalhoub said.

Generally, hospitals follow the desires of patients or their families in how far doctors should go to save their lives. But soon those directives might not carry the same weight.

“If you have an advance directive that says, ‘I want everything done for me,’ in a pandemic that will not count,” said Arthur L. Caplan, a professor of bioethics at the New York University School of Medicine. “What will count is whether you’re likely to benefit more than the next guy or next woman.”

The state already had a plan for rationing ventilators in the event of a pandemic. In 2007, a state task force devised a formula, revised in 2015, to help hospitals decide who would get ventilators. It suggested hospitals form triage committees to weigh different factors, including likelihood of survival. It also envisioned a lottery system in some instances, and taking people off ventilators if they did not improve in a relatively short amount of time.

But the Department of Health has not instructed hospitals to use the guidelines, and they remain little more than a template for how hospitals might approach the problem. And some changes would be needed to adapt to what is known about Covid-19, such as that some patients need to be on ventilators for a week or two before improving, doctors said.

“We know from the data coming in about Covid that they need more time,” said Dr. Powell of Montefiore, who was a member of the task force that produced the 2015 report.

It is, however, receiving renewed interest. In mid-March, Dr. Powell and some other members of the task force participated in a conference call with the Department of Health and representatives of several major hospital systems, several participants said.

About two weeks ago, a five-page draft based on the 2015 guidelines was circulating, participants said. In interviews, some said they had expected the state would authorize a plan soon after the call.

“There was always the expectation they would implement crisis standards of care guidelines, and they have not issued a statement doing that,” Dr. Powell said.

A participant in the process, who requested anonymity because the person was not authorized to speak about sensitive internal discussions, said guidelines were still being drafted.

One doctor at Weill Cornell Medical Center, on the Upper East Side, said that he has lately been wondering what to do if there are two patients and only one ventilator left. Without guidelines that authorize him to use his judgment, “do I walk slowly to the door with the 90-year-old?” he asked.

nycitylovers_s3duaw2020-04-01T17:23:54+00:00April 1st, 2020|NYCITYLOVERS.COM|Comments Off on Should Doctors Have the Right to Withhold Care From the Sickest Coronavirus Patients?