He Said Mass Via Live Stream. 8 Days Later, He Fell to the Virus.

He Said Mass Via Live Stream. 8 Days Later, He Fell to the Virus. 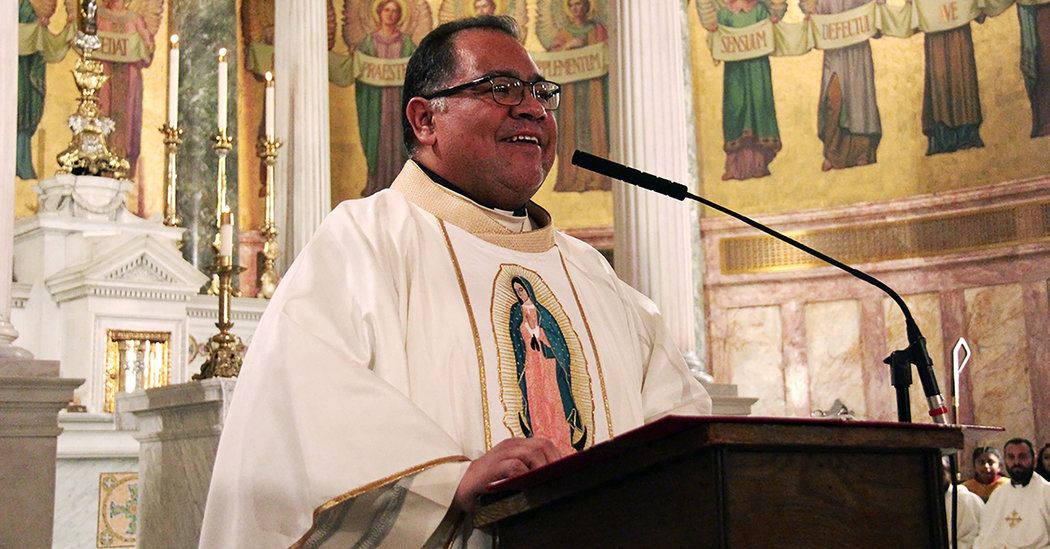 Father Jorge Ortiz-Garay did not want his parishioners to be afraid.

The world all around us is in crisis, he said as he celebrated Mass at St. Brigid’s Church in Brooklyn on March 19, the pews empty and his flock watching at home via live stream. But perhaps the coronavirus, and the fear it has brought, can be seen as an opportunity to become closer to God.

“There’s no better time than this time of trials, this time of challenges, to fulfill our call to holiness,” said Father Jorge, as he was known. “At these moments of trial and crisis, at these times when maybe we are asking what will happen to us, trust in the Father.”

He assured his parishioners that he was in good health.

But eight days later Father Jorge died at Wyckoff Hospital Medical Center in Brooklyn. He was 49.

He was the first Catholic priest in the United States known to have died of the coronavirus, according to the Diocese of Brooklyn, which said two more of its priests had also tested positive.

Father Jorge’s death on March 27 marked a grim milestone for the Roman Catholic Church, that most ritualistic of institutions, whose sacred and elaborate traditions have been utterly disrupted by the pandemic. Its fundamental rites — including congregating to worship — have been fractured by imposed isolation and social distancing.

Now, mourners say, they are doubly pained by the loss of a church leader and the inability to come together and share the comforting rituals of public grief.

Restrictions on public gatherings, and the fact that the Diocese of Brooklyn canceled all Masses and closed all churches and rectories last month, mean that no public funeral mass will be held for Father Jorge anytime soon.

Elimelec Soriano, a layman who helped Father Jorge organize events for the Mexican community, said he had been flooded with calls from grieving parishioners across Brooklyn and Queens.

“People keep saying, ‘We have to do something for him,’ and I keep saying to them, ‘We will, we will, we just have to pray that this virus goes away first and things go back to normal,’” said Mr. Soriano.

Father Jorge spent the last years of his life at St. Brigid’s, a parish in a working class area on the edge of Bushwick, one of Brooklyn’s most quickly gentrifying neighborhoods. The church conducts half of its weekend masses in Spanish.

He was well known for his work in the church’s outreach to Latino immigrants in Brooklyn, particularly those who came from Mexico, like he did as a young man.

On Monday, Representative Nydia Velazquez, a Democrat whose district includes Bushwick, praised Father Jorge in a statement for “comforting those in need while advancing the rights and opportunity of our immigrant community.”

“It is particularly difficult for us to lose such a community pillar during this challenging time,” she said. “May we all draw strength from his memory and seek to care for one another, especially the vulnerable, as he did his entire life.

Father Jorge’s death highlighted a troubling trend that has emerged in New York, where information released by the city indicates that poorer neighborhoods of Brooklyn, Queens and the South Bronx have the city’s highest proportion of positive coronavirus test results.

“Everything happened so fast,” said Father Joseph Dutan, a young priest at St. Brigid’s who stood beside Father Jorge at Mass that day.

According to the city, Brooklyn and Queens are home to 59 percent of people diagnosed with Covid-19, the disease caused by the coronavirus, and 53 percent of the people who have died from it lived in those boroughs.

“A lot of people here have jobs where they cannot do their work from home on a computer,” said Father Vincenzo Cardilicchia, a parish priest in Bushwick who was a friend of Father Jorge’s.

“People here live on top of each other. This is not Long Island or Staten Island or New Jersey, where you have a lot of space and a yard in front of your house.”

In Bushwick, more than 68 percent of people who were tested for the virus received a positive result, according to information released by the city.

“It is facile to think this is an equal opportunity virus,” said Dr. Ashwin Vasan, a professor at Columbia University’s Mailman School of Public Health. “In some ways that is true because we can all get sick from it, but the impact of the pandemic is not going to be felt equally across society.”

“We know that in communities of color, lower income communities, communities with a higher proportion of immigrants and other marginalized groups, those folks at a baseline suffer from higher rates of chronic health conditions than the general population,” he said.

Bushwick has been squeezed by gentrification in recent years, with an average asking rent in 2017 of $2,530, slightly higher than the average for all of Brooklyn.

But the neighborhood remains poorer than the rest of the city, with a poverty rate of 27.1 percent in 2017, compared with 17.9 percent citywide, according to the Furman Center, a think tank at New York University. It said 53.9 percent of residents there identified as Hispanic.

Father Cardilicchia said that Father Jorge “was not afraid” to go into the community to preach to poor working people, “right until the end.”

“He would go to a body shop to give ashes to the people working there on Ash Wednesday,” which this year fell on Feb. 26, he said. “All people do in this city is just work, work, work, so he would go to the homes and bless their homes.”

Father Jorge’s path to Brooklyn was a winding one. Born into a wealthy family in Mexico City, he became a lawyer and was engaged to be married when he felt a call to the priesthood.

He left his fiancée and his legal practice and studied first in Italy and then at a seminary in Newark, becoming a priest in 2004.

He moved in 2014 to St. Brigid’s, a parish that was largely Irish and Italian until the early 1990s but which today draws congregants with roots from across Latin America.

“It is very Ecuadorean, Mexican and Dominican, and a little Puerto Rican and Colombian and Salvadoran and Nicaraguan too,” Father Dutan said. “It is a little bit of all of South America. We have parishioners from everywhere here.”

Before the introduction of public health restrictions, the parish office at St. Brigid’s was often a hive of activity, Father Dutan said, with people stopping by for spiritual advice, couples arriving for marriage counseling or neighborhood stalwarts stopping by for a social call.

Each December, Father Jorge organized a mass on the Feast of Our Lady of Guadelupe that drew thousands of people, the diocese said. Before he died, he had been thinking of holding it at Barclays Center this year, when the holiday falls on a Saturday, said Father Dutan.

Father Jorge began to feel unwell not long after Mass on March 19, but he did not give it much thought, said Father Dutan. He suffered from chronic bronchitis but was relatively young, and it did not seem unusual when he developed a cough.

But then his fever went up and would not come down, and by last Monday night he called the young priest who lived one floor above him in the rectory. Could Father Dutan take him to the hospital?

“He was running out of breath. He said, ‘I don’t feel well, I have to go to the hospital,’” said Father Dutan, who quickly called an ambulance. He watched as emergency medical workers took Father Jorge, then gently told him that he could not come along. “That was the last time I saw him.”

But it was not the last time he heard from Father Jorge. The older priest continued to text his friends from inside the hospital. The night before he died, he texted Father Dutan to ask for his prayers.

“I said ‘No, Father, you have to fight,’” Father Dutan said. “He said to me, ‘Don’t worry, I am happy. I am not scared because I know the Lord is with me.’ Those were his last words to me. They were very consoling.”