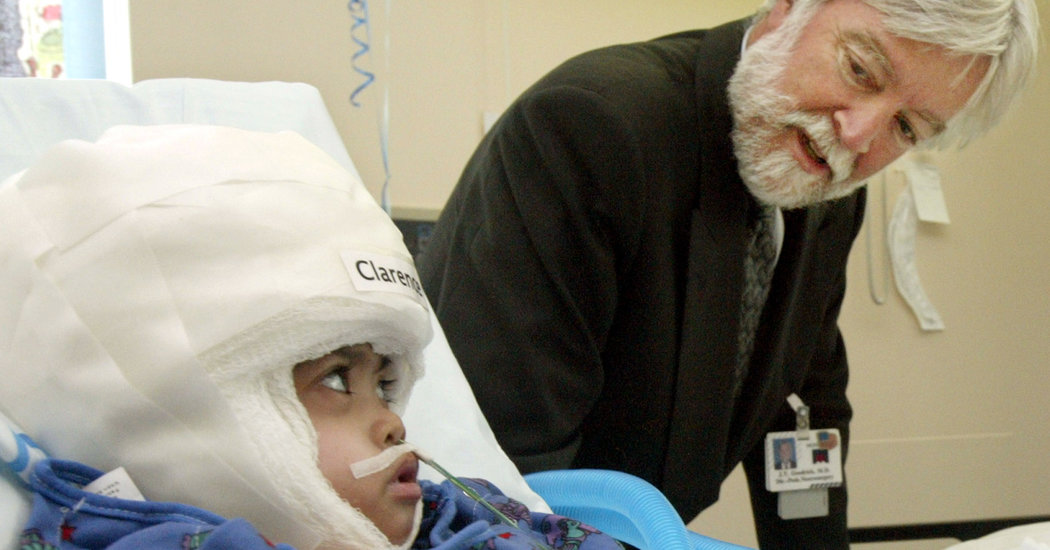 This obituary is part of a series about people who have died in the coronavirus pandemic.

Dr. James T. Goodrich, a pediatric neurosurgeon known for successfully separating conjoined twins in a complicated and rare procedure, died on Monday at Albert Einstein College of Medicine and Montefiore Medical Center in the Bronx. He was 73.

The cause was complications of the coronavirus, according to Montefiore, where he was the director of pediatric neurosurgery and had spent more than 30 years of his career.

Dr. Goodrich was thrust into public view when he conducted a series of four operations over nearly a year on Clarence and Carl Aguirre, twins from the Philippines who were joined at the tops of their heads and shared major veins in their brains. Dr. Goodrich led a team of surgeons at Montefiore’s Children’s Hospital, and the twins’ story generated headlines, including in The New York Times, and was the subject of television specials.

During the final surgery, in August 2004, the team discovered that the twins’ brains were connected by more brain tissue than they had initially thought, a potentially serious complication.

“We got to this point and we were stuck,” Dr. Goodrich told The Times after the operation, but “we did a lot of soul-searching,” and decided to continue.

Hours later, Clarence and Carl lay next to each other, alive and well. They had no major complications after the surgery, and their mother, Arlene Aguirre, said, “My dream has come true.”

Carl and Clarence, who turn 18 later this month, live with their mother in Scarsdale, NY.

James Tait Goodrich was born in Portland, Ore., on Apr. 16, 1946, to Richard, who worked in advertising, and Gail (Josselyn) Goodrich, an artist and designer. He served in the Marines during the Vietnam War, then studied neurosurgery and psychobiology at the University of California, Irvine; Columbia University; and the Neurological Institute of New York before starting at Montefiore.

He married Judy Laudin in 1970. In addition to his wife, he is survived by three sisters, Kristen Goodrich, Jan Rentenaar and Carol Montecucco.

In another celebrated case, Dr. Goodrich led a team of 40 surgeons in a 27-hour procedure in 2016 to separate another set of twin boys, the seventh separation procedure of his long career.