A ‘Wartime Factory’ in Brooklyn Is Fighting Coronavirus

A ‘Wartime Factory’ in Brooklyn Is Fighting Coronavirus 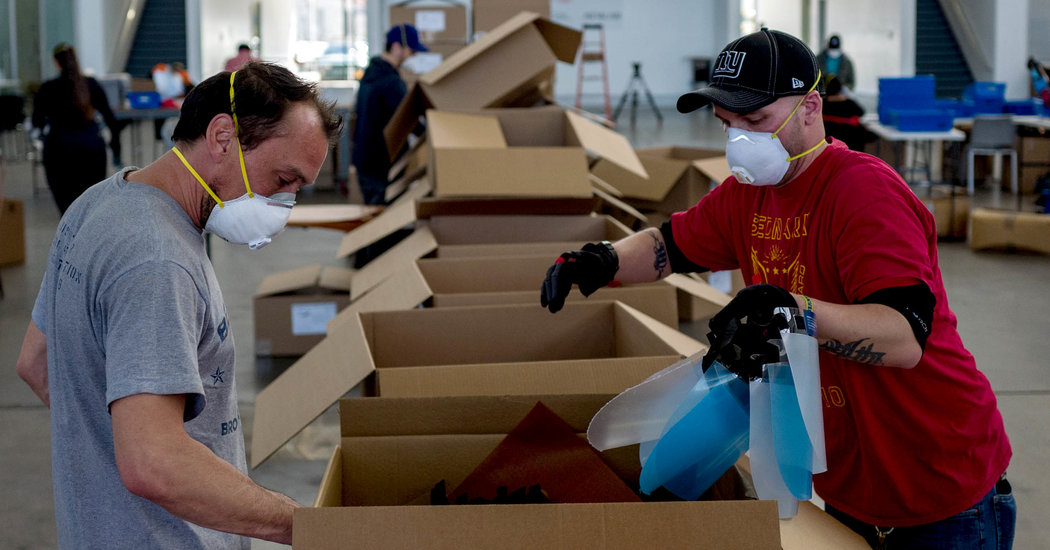 During World War II, so many New Yorkers flocked to the Brooklyn Navy Yard to build warships that it was nicknamed the Can-Do Shipyard.

In recent years, it has become a hub of independently owned and innovative manufacturers that include artisanal distillers and industrial metal fabricators.

But with the coronavirus ravaging New York City, the old Navy Yard — one of few large manufacturing centers remaining in the city — is again pitching in during a national crisis as a hub for fighting the pandemic, producing desperately needed medical supplies, such as face shields, hand sanitizer and hospital gowns.

It has returned to “a wartime factory,” said Mayor Bill de Blasio as he toured a former shipbuilding hangar there on Thursday.

“This is what people had to do, in battles, in wars, all over this world when there weren’t going to be supplies coming from someplace else,” the mayor said. “They had to make their own. That’s what’s happening here in Brooklyn.”

That hangar had become an events space called the Duggal Greenhouse, part of Duggal Visual Solutions, a graphic display and printing company that typically makes printed glossy graphics for such brands as Estee Lauder and Coach.

But with the greenhouse’s scheduled events canceled because of the coronavirus outbreak, the space has been repurposed as a factory for making disposable face shields. The operation includes more than 300 workers, many recently laid off from restaurant jobs or nonessential businesses that the state ordered to temporarily close.

Duggal has partnered with another Navy Yard company, Bednark Studios, to make the shields.

“This isn’t about making money. This is about helping put people back to work and helping front-line medical workers who are saving New Yorkers,” said Michael Bednark, whose custom fabrication company typically makes interior displays for restaurants and retailers including Heineken, Nike and Google.

Leaders at the Navy Yard have been scrambling to get various companies to work together to make supplies.

“It’s the scale of the ecosystem here that makes this possible,” said Mr. Ehrenberg, who has been speaking with city leaders about pressing needs and how to overcome bureaucratic obstacles. “No one here could do it alone.”

Because of the order for nonessential businesses to close, Mr. Bednark had shut his shop and laid off part of his work force of 120 employees. But with the desperate call for medical equipment, he and other manufacturers huddled with Mr. Ehrenberg.

“I said, ‘We got to figure out something to do. I’m not going to go down with the ship,” said Mr. Bednark, who pivoted to making shields, a new product for his company.

In a scramble over a couple of days, his prototype was approved by city health officials, who ordered a first batch of 120,000 shields.

“We’re used to making quick products and making them very quickly with what’s available,” said Mr. Bednark, who procured plastic shields from a supplier in Long Island City, Queens, and elastic from a company in Manhattan’s garment district. A steady supplier in nearby Williamsburg came through with 360,000 foam strips with adhesive, as forehead cushions for the shields.

Mr. Bednark said he called many recently laid-off employees to come back on the job and hired an additional 150 workers. He teamed up with Mr. Duggal, who has 465 workers and plenty of production space at the yard.

Duggal had also trimmed its staff recently. But then it started rehiring workers who began working long shifts making the shields.

Machines that had recently made sleek display stands for prominent brands were repurposed to help make thousands of shields a day.

Since the city put out a request to local manufacturers for masks, shields, gowns and ventilators, officials said they have had more than 1,000 proposals.

“New Yorkers have really stepped up to the plate and found a way to produce things we never thought we could produce in 36 hours,” Mr. Rodrigues said, adding that over the next three months, local manufacturers are aiming to make up to 1.5 million face shields.

“This is something that wasn’t made in New York City, that now people are just taken upon themselves to go and create to protect other people,” he said. “So, even with this pain, New Yorkers are stepping up in ways that are, like, unimaginable.”

Mr. Bednark said 50,000 shields would be delivered to the city over the weekend and an additional 70,000 by next Tuesday.

“It’s amazing to see New Yorkers respond to a crisis, from Hurricane Sandy to 9/11,” Mr. Duggal said. “You see the best of people, the way they band together.”